<- “A story about a Vietnamese living in Latvia”, Cao Viet Nguyen | “Great migration of Kalderashi and their throne in Poland”, Agnieszka Piksa ->
Back
Next
Picture 1 of 6 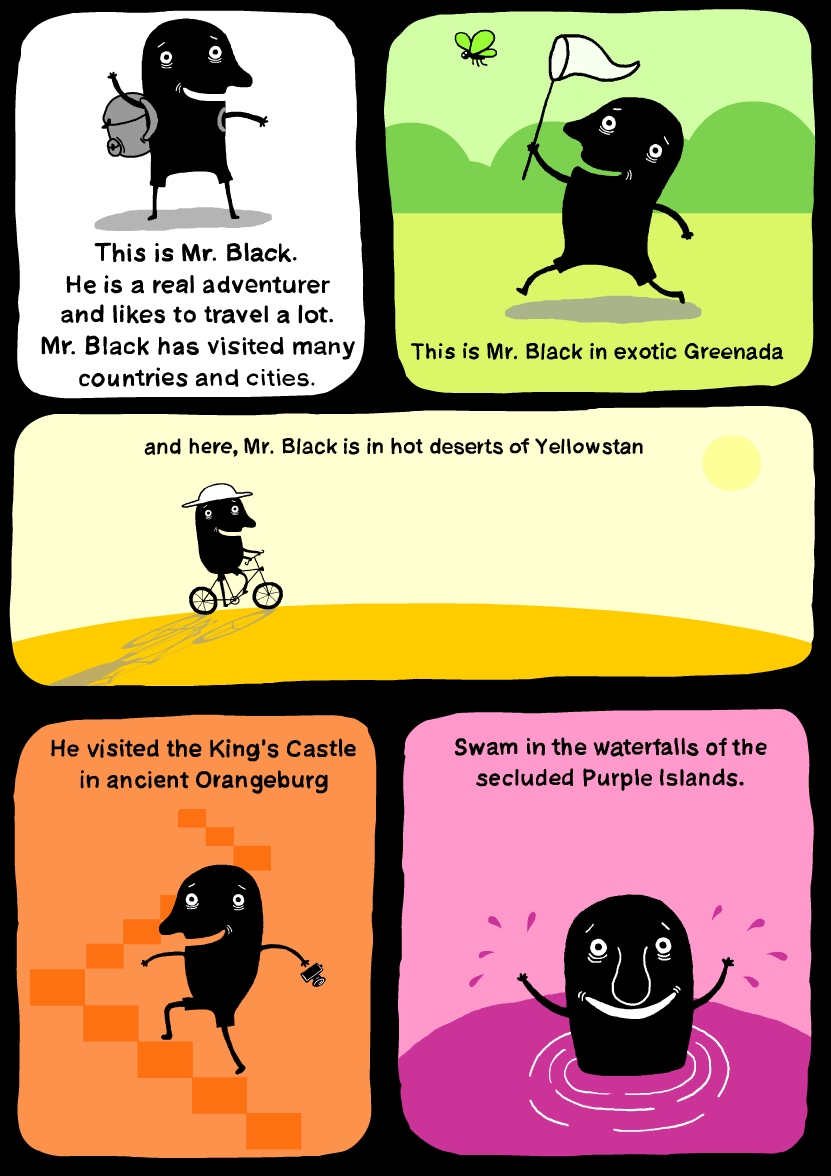 This funny little story portrays the life of the adapting immigrant and speaks of the indifference of a huge bureaucratic machine, which creates trauma and difficulties.

Dmitry Yagodin (1979) was born in Moscow, in the Russian Federation. He studied Animation at the National Academy for Theatre and Film Arts in Sofia. He works as a freelance artist and independent director and animator.

1. This is Mr. Black. He is a real adventurer and likes to travel a lot. Mr. Black has visited many countries and cities.

2. This is Mr. Black in exotic Greenada,

3. and here, Mr. Black is in hot Yellowstan.

4. He visited the King’s Castle in ancient Orangeburg

5. Swam in the waterfalls of the secluded Purple Islands.

1. One day Mr. Black came to Blueland. Blueland was a small and nice country with beautiful countryside and cozy towns.

2. People were smiley and friendly, and their language – melodious and blue. Mr. Black realized that this is where he wanted to live forever!

4. Mr. Black understood that to become a citizen of Blueland he must get The Big Blue Seal from the Ministry of Color. But it was a little bit problematic.

1. “To get the Big Blue Seal you must first fill in the Special Blue Form,” they said in the Ministry. And so the longest adventure of Mr. Black began.

2. After filling in the form, Mr. Black got three pretty little seals, but this wasn’t enough.

3. Now he had to have them certified with nine Blue signatures from nine different directors.

4. So Mr. Black started to collect all of the necessary signatures and seals.

5. But the number of seals and signatures started to increase more…

1. Days turned into weeks, weeks into months…months into years.

2. In the meantime Mr. Black found a job,

4. moved into a cozy Blue house

5. and eventually began to speak the Blue language quite well.

1. His new Blue friends often laughed at him,“you’ve become as Blue as us!” they would say.

2. Indeed, Mr. Black noticed, that the black color of his body began to fade because of the numerous signatures and seals. But the Big Blue Seal was still missing.

3. One day, after many years of waiting, Mr. Black received a letter from the Ministry of Color.

4. “We would like to inform you that you have been approved for the Big Blue Seal” the letter read.

5. When Mr. Black went to the Ministry, his body was already so blue that it was really hard to find a place for the last seal.

1. Actually, the Big Blue Seal turned out not to be so big after all and Mr. Black was surprised that he had had to wait for such a long time for it.