<- “The Boomerangs, in three chapters”, Corsino (Daniel López Bončina) | “We all live on planet Earth”, Dace Brakmane ->
Back
Next
Picture 1 of 5 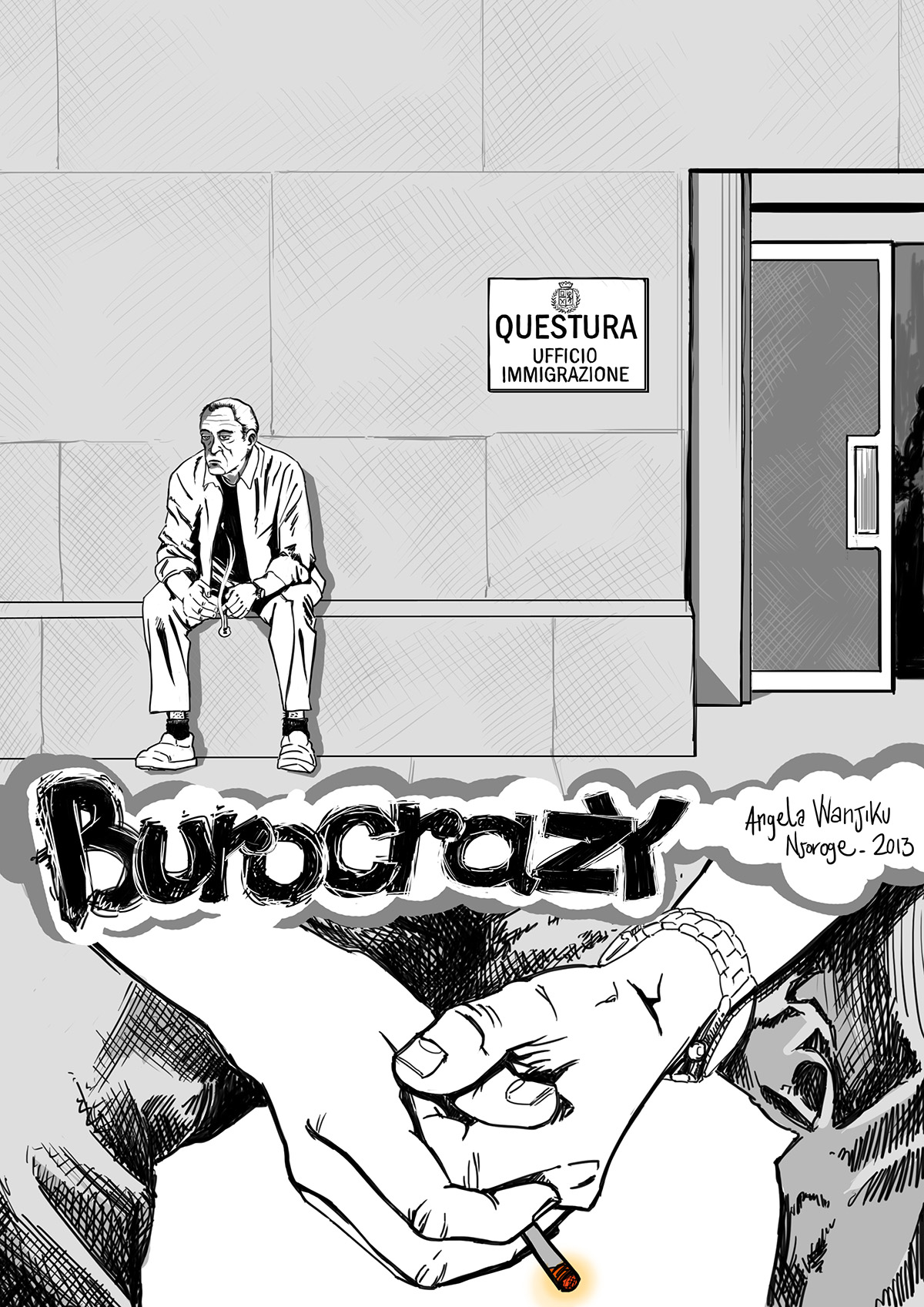 The decision to name this piece of work ‘’Burocrazy’’ (‘’bureaucracy’’ in English) was made after spending a lot of time and effort filing and compiling documents, in this case linked to obtaining a residence permit. The drawings represent the majority of the foreigners we met in immigration offices, who came from different walks of life and displayed a unique diversity, each with their own language, culture and way of dressing. The decision to present only a single item in colour is a means of drawing attention away from the external differences between the people involved, emphasising instead the aspect in focus at that particular moment. Another key feature is the use of different fonts to symbolise the different accents in which Italian sentences are spoken.

I am originally from Kenya and I am currently studying nursing in Italy at the University of Padua. I draw for fun and I love going to the cinema! I entered this competition after a friend directed me to the website. Having experienced the problem of racism, I wanted to tell my story through my drawings.

Page 3
1. I’m bored / Ma Ji look at the photos of your cousin
2. He is beautiful and small. /Do you remember your aunt E-Hui? They live in Wenzouh now.
3.Excuse me, I would like to enquire about the family reunification process. / Go down the hall to the office on your right.
4. I want to request Italian citizenship for my son, who is 18 years old.
5. What’s our number?

Page 4
1. Mr. Pawan, please sign here…. Here is your temporary residence permit , with this you can ….
2. I can attend my sister’s wedding and come back. / Yes.
3. Karim has just gone back home, he has gone to visit his mom. / Your brother has always been a good boy, and Samir? How is he?
4.What’s for dinner tonight? / You have to write your surname here. / What is your doll’s name? / Clara.

Page 5
Who can request an Italian residence permit?

In spite of their young average age, the foreign population (15-64 years) has similar levels of education to Italians. Almost half of foreigners possess a middle school degree, compared to 45.3% of Italians. The numbers of graduates are almost identical (40.9% and 41.1% respectively), while one immigrant out of ten possesses a university degree compared to 13.5% of Italians. In 2011 foreign labour represented 10.2% of the total labour force.
The employment rate among foreigners continues to be higher than that among Italians (66.2% compared to 60.7% respectively), as does the unemployment rate (12.1% compared to 8.0% respectively). On the other hand, the inactivity rates among the immigrant population, are almost ten percentage points lower than those among the Italian population (29.1% compared to 38.6%). For the third year in a row, deteriorating working conditions, and particularly declining rates of employment, are more pronounced among immigrants than among Italians.

The permit is issued after 4 to 6 months by the immigration service.
In the meantime, applicants are provided with a receipt for the request for the permit or for renewal of the permit.