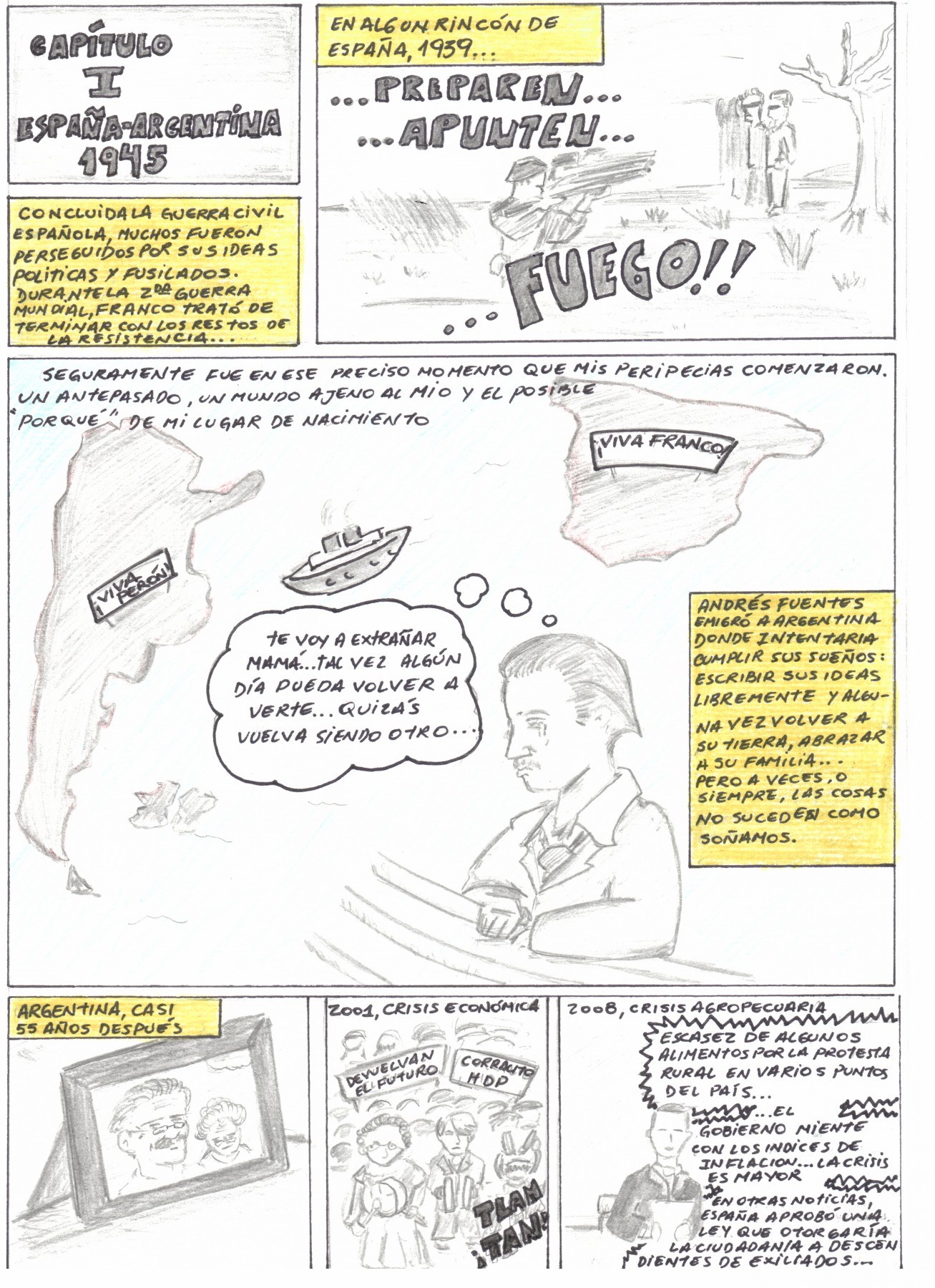 This is a story about a young man who seeks opportunity in the country his grandparents were forced to flee and to which they could never return. He faces many problems. The main difficulties he encounters are linked to discrimination and bullying at school. This story is based on real events.

Corsino (Daniel L. Bončina) was born in Argentina in 1985. He studied Law at the University of Buenos Aires, has published various short stories and in 2010 travelled to Slovenia. Today he lives in Ljubljana, where he studies Italian Literature and Spanish.

1. Chapter I Spain-Argentina 1945 / When the Spanish civil war concluded, lots of people were persecuted and shot due to their political ideas. During World War II, Franco tried to finish off the rest of the resistance. / Somewhere in Spain, 1939 / …READY…AIM…FIRE!!

2. Surely it was in that moment that a series of unexpected events started. An ancestor, a world foreign to me and the possible question of “why” in relation to my place of birth. / I’ll miss you mum… maybe some day I could see you again… maybe I will come back different… /Andres Fuentes emigrated to Argentina, where he would try to make his dreams come true; write down his ideas freely and someday go back to his place of birth, and give hug his family… but sometimes, or even always, things don’t happen as we dreamt.

5. 2008, Farming crisis / Scarcity of some goods because of rural strikes in different parts of the country… the government is lying about inflation… the crisis is growing. In other news, Spain passed a law that would grant the citizenship to descendents of exiles…

2. Why Spain? Now? Finish your studies before you go… I know it’s difficult but we can help you. / Mum you know that I want to be a writer and here I have no future as one. Besides, how long should I wait to become independent. / Do you have a plan? Anyway, you are an adult.

3.  … Well, it’s ok Diego… take care and remember that you can count on us. I’m sure that if your grandpa were alive he would go with you.

4. Thank you both! Now I have to start saving money… citizenship is not enough. / HMM! The only plan that I have is a dream. I think that if I continue thinking about it I wont go anywhere… HMM… but it doesn’t seem complicated… and the language doesn’t either… / At least I’ll have security, which I don’t have here.

6. 1 month after the World Cup. Spain won and unemployment has increased. / Hi! Mum, I’m living in a flat with other students. I haven’t found a job but I have already enrolled in university…

7. We are looking for waiters.

8. …I found a job in a cafeteria and next week I’m starting university.

2. Two coffees with milk and a question, you are not Spanish, are you?

4. Wait, I know that accent.. you are Argentinean! /  That accent is so cool! / Another Messi… as if it were a great thing. / EEEH… Thanks, I’ll be back in a minute. …Sorry, anything else?

6. Three months later / This crisis is because of immigrants. It seems that stealing our jobs is not enough, they are also using our hospitals, on the TV, playing sport, without being Spaniards… and I’m still unemployed.

7. Well Carlos, your luck will improve. Come with me, I’ll buy you a coffee.

10. In your face! Have you seen! What have I told you? …These South Americans, these Indians come to steal us… let’s go somewhere else, with Spaniards.

1. Chapter III from Spain to Croatia 2012. / Hi mum, hi dad! I got a scholarship to study for a year in Croatia. Yes, where grandma’s from… I’m so happy, I needed a break from the comments I hear everyday, there it’s gonna be different.

2. “Don’t worry Dieguito, just say that you’re Spanish…” / “No mum, never… a descendant of Croatians and Spaniards is enough. I’ll call you when I arrive, love you.”

3. Zagreb… / Good morning, before we start I want to inform you that we won’t speak Croatian… I want to know if there are any native speakers…

7. Can you modulate when you speak? HMM! And do not think that just because you’re a native speaker it’ll be easier for you. Here, we are going to speak Spanish, not Argentinean… and the other native speakers?

8. My name is Clara and I’m from Badajoz /  I’m Juan and I come from Barcelona.

11. Professor, we haven’t read it for today.

12. Well as nobody has read it, let’s read aloud what you had to read for today.

13. I’m tired, I wanna go home… this country sucks… at least next month we have Latin-American Literature…

1. Excuse me, they have just changed my group. I am Veronika Marić. / Have a seat.

2. Who cares… what… what? What was I thinking about?

3. One month later / As you know Hispanic Literature has become quite popular after the “boom” in the middle of the XX century. The magical realism and great novels of Rayuela wouldn’t have been possible without Spain, without the Vanguard. That’s why we’re going to focus on Spain, since the peninsula made Latin literature strong and well known.

4. “…one more thing, in two months you have to write a seminar paper on a tale or novel that you have read.”

5. Three weeks later, in the professor’s office / Professor, I’ve prepared this paper about “El Matadero”. / I don’t think it would be a good idea for you to talk about an Argentinean story, but… as you want…

7. Two days later /That’s it professor. It took me two days of hard work but I found a new topic and I’ve finished my paper. Though I still have one month to check it, I wanted to know if this is ok.

1. One week later / I checked the paper, I liked it and I understand that for you, who are not native speaker, it’s difficult to write in Spanish… but don’t worry, correct the mistakes that I’ve marked and maybe you’ll get an 8.

2. Professor, here you’ve corrected lots of prepositions, for example “of the state” according to you is “from the state”… and… / You are the only one to correct these mistakes…

4. In Argentina these things wouldn’t happen… but… bah! Who am I kidding?/ …Have you seen the awful Peruvian that works in the bar.

5. That was me 3 years ago… what we say without thinking is unbelievable… maybe it is bigger than us, maybe it is something we have inherited or heard, maybe to live it is necessary to understand and feel… in my case I arrived seeking a dream…

7. July 2013 / I don’t know anymore if I want my future to be secure. I guess that those abrupt changes, the unexpected ones, are the ones that cause the horrific uncertainty of life, for some people the imperfection of dreams that we have to avoid before they become a “maybe”, losing control of everything. I learned to love those “maybes”. Because, maybe someday I could tell my anecdote as an example of something… although, maybe I won’t be the writer I dreamt of being… In one week I’ll go back to Spain, but this time I won’t be alone… Veronika is going to study in Madrid… By the way, we have been together for two months. As I said, I am not the writer that I dreamt of being, but I am writing the best story of my life. The End.