<- “German and Polish Shoes”, Paulina Stulin | “A story about a Vietnamese living in Latvia”, Cao Viet Nguyen ->
Back
Next
Picture 1 of 6 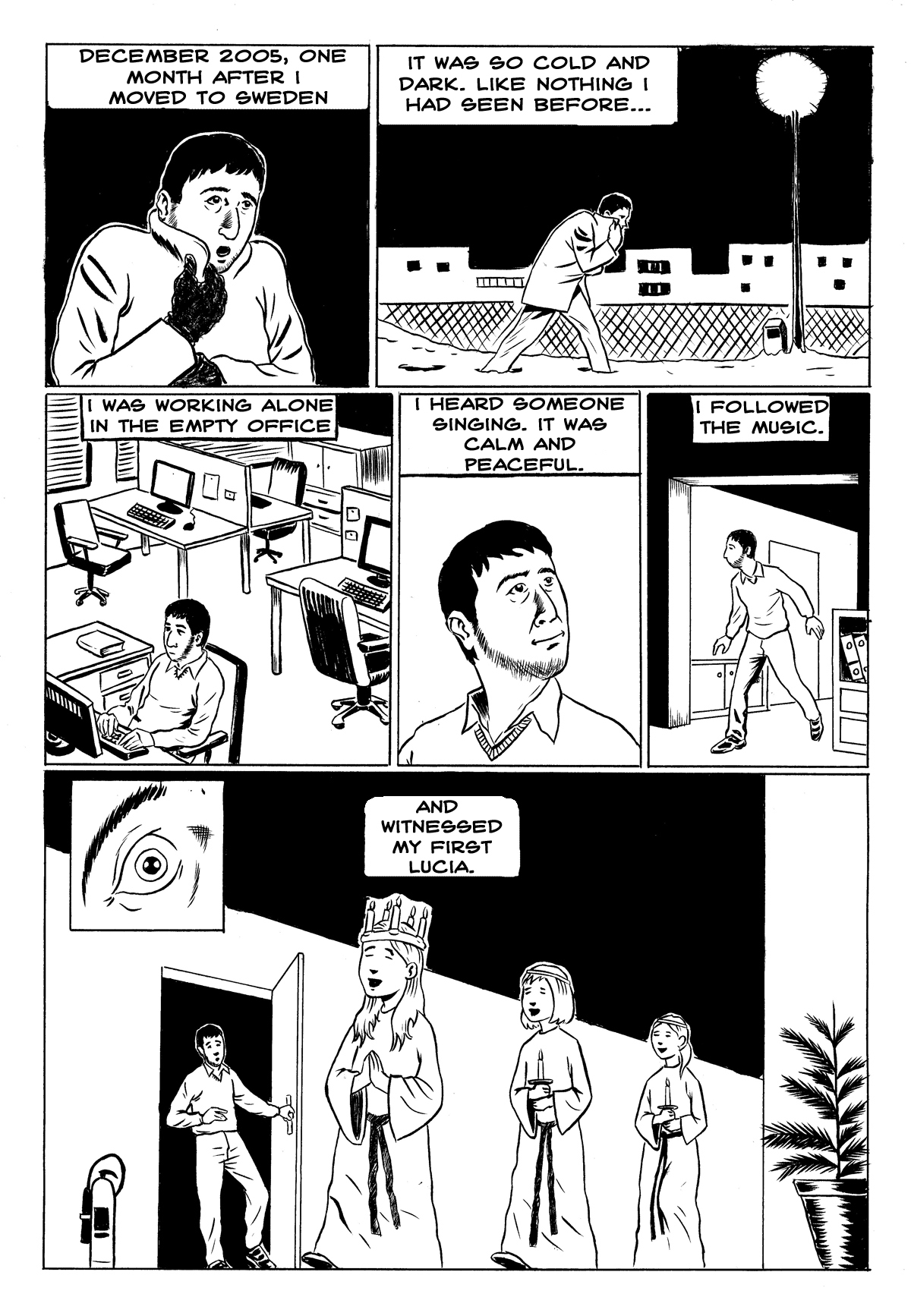 This comic describes the deportation of an Armenian family with 3 kids, who had lived in Sweden for 11 years. Police raided their house early in the morning and took them to the airport without letting them pack, put them on a plane and sent them to Armenia. The second part of the story describes my own experience. Just after this incident I went back to Turkey and the French parliament passed a law stating that the Turkish people had committed genocide against the Armenians in 1915, and as a result nationalism was exploding in the country.

2. It was so cold and dark. Like nothing I had seen before…

3. I was working alone in the empty office.

4. I heard someone singing. It was calm and peaceful.

5. I followed the music.

6. And witnessed my first Lucia.

1. 6 years later, it was Lucia again, and I was reading the news…

2. I saw an article about a family, who got deported to Armenia, after 11 years in Sweden./ That’s horrible…

3. I saw a video of the family living in terrible conditions. Their 17 years old son, Haik, told the story. /  Police came at 5 in the morning.

5. They told us to pack only the most important things. They treated us as if we were terrorists.

7. I don’t even understand the language here.

1. The first night they didn’t let us into Armenia, ’cause we didn’t have the right documents, we slept in a cold room.

2. Mom suddenly interrupts the interview. / We didn’t get any food! / We were all so hungry…

3. I miss my friends in Sweden, my football team, my school.

4. He almost smiles. He doesn’t get that this is real. He looks like he’s waiting for someone to tell him that all of this is a joke.

5. During the interview, we see the dad in the background. He doesn’t talk, he doesn’t look at the camera.

1. A couple of days later I went to Turkey on vacation.

2. The French parliament had just passed a law stating that the Turks had committed genocide against the Armenians in 1915.

5. A big media campaign against France and Armenia started. / French genocide in Algeria! / Armenians who betrayed us!

6. Even people around me started talking nonsense. / It was the Armenians who attacked us first. We did what we had to do. / Us? We?

1. No one attacked you or me. Why do we have to identify ourselves with people who lived 100 years ago?

3. They are our ancestors. We owe them this country. We should be proud of them, and not let anyone accuse them of such stuff. / God! Not again this nationalist bullshit!!!

4. The TV was full of angry men, who spread even more hate. / France should first confess its own crimes!!! / (and how does that change what happened in 1915?)

5. Armenia wants to take a piece of our land! / We have the most beautiful country in the world. That’s why they want to divide us! / (travel around the world, every country is a piece of heaven.)

6. The bookshops were suddenly full of books about the dirty history of France and Armenia. / I didn’t know French people were so awful. I guess I have to read this…

1. Who’s writing these books? Who’s printing them? How can they do this so fast, in just one week?

2. Who is behind this craziness? / Who are these experts telling you whom to hate?

3. I was tired of all this. I wanted to go back to Sweden.

4. The peaceful land where things were normal, where there was less hate.

5. Then I remembered, everything was not ok for everyone in Sweden either.

6. Where do you think you will be in one year / I hope I will be back home.

8. I hope you come back home and see the Lucia there next year brother…

9. “Nationalism does nothing but teach you how to hate people that you never met.” – Doug Stanhope