“A story of migration? …or a tale to fight racism?”, Nuno Abreu 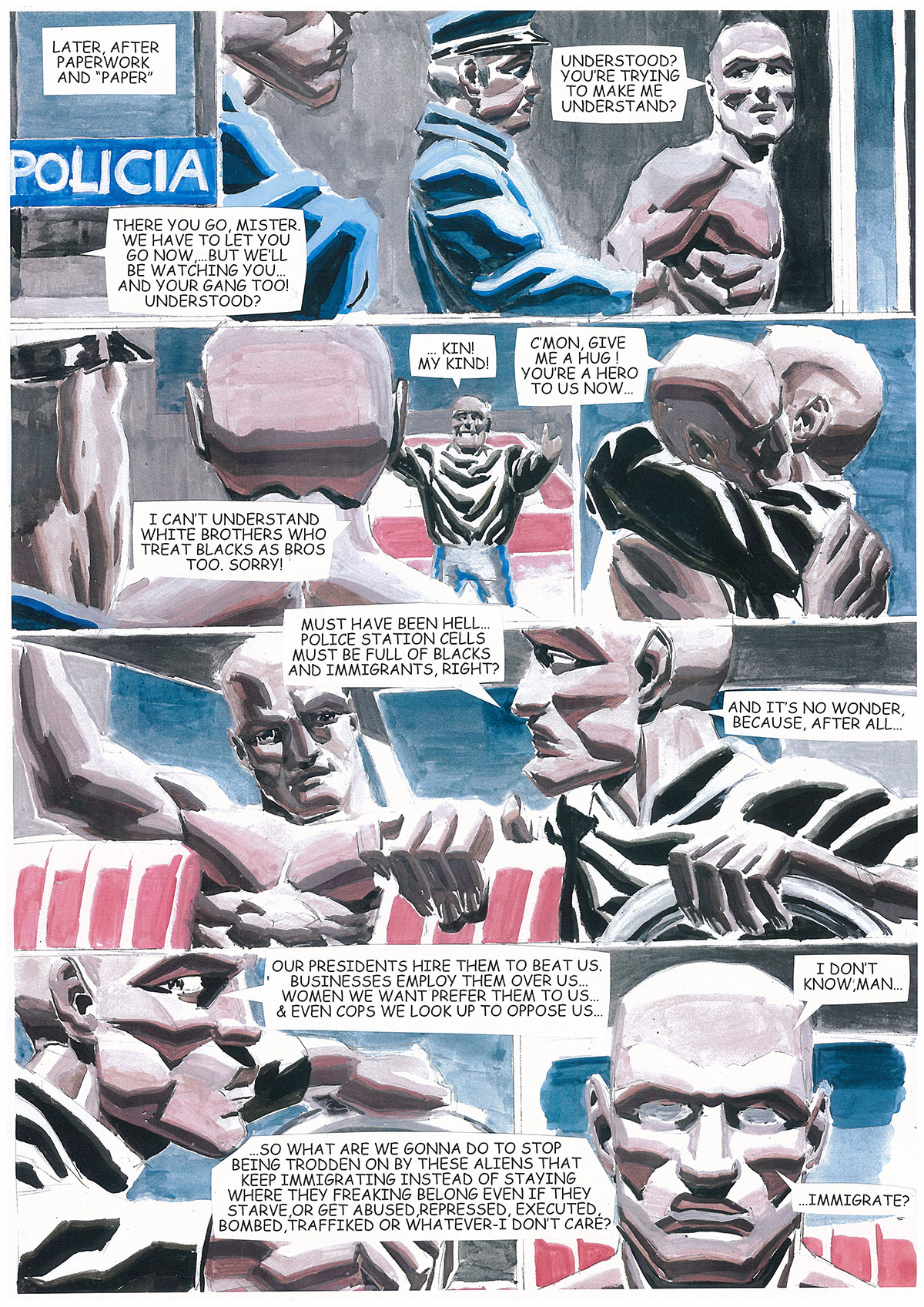 A day in the life of a skinhead who abuses members of a minority group (which represents all other minorities), but is constantly stopped by members of the majority. When he insults a black player, even the rival team’s players defend him. When he tries to separate a black man from his girlfriend, she tells him to go away, when he beats up a black homeless man, he’s arrested. After being released on bail, and after a whole life spent opposed to migration, seeing the majority defend minorities from his racist abuse makes him consider migrating. I have tried to show some of the abuses minorities suffer, the ignorance of bigots, the connections between racism and issues of migration, and how stronger support for minorities can deter racists.

The author was born in Spain and moved to Portugal when he was a child. He studied art and migrated to the UK, before moving back to Portugal. He is now looking for a stable job in Portugal as he works on publishing his comics.

1. …in either case, it is a story of rivalry that starts with a safer form of rivalry, in a football stadium, somewhere in southern Europe… Once again in the football arena, like in all other arenas when they are fair, a black man proves his equal worth, and once again, a white man feels envy…

3. Hey! Immigrant scum! That ball was for my team! first they take our jobs…then they take our balls- ha! / Here’s a banana for you to play with, let go of the ball! Balls are what whites have- he, he!

4. Don’t listen to that guy. We need you. He doesn’t even know what he’s saying! Let me handle this, brother. Don’t worry.

5. He can’t see past colours?  Very well…let me show him what’s under mine.

6. Come on! Not that pro-immigrant, anti-racist crap again!

1. And so after being rushed out of the stadium by those “pro-immigrant, anti-racists”…   / oh, great. Another black. Probably an immigrant too.

4. Get your filthy paws off her, you freaking alien! You rapist n… / hey, stop! He’s not harassing me, moron! He’s my boyfriend

5. It’s all your fault…that they keep coming, taking our wom…jobs!

you’re white! you should prefer one of us, not this…this…

6. If they didn’t buy what we produce…if we didn’t have their products to buy at lower prices than our own…we couldn’t even create enough jobs, you ignorant thug!

1. Honey, please… he didn’t mean it! / Of course he meant it, darling,  he’s mean!  Don’t be so kind to them! Don’t ever take their abuse! / And you…it’s you who should get out! Get your hatred and bigotry and selfishness out of your system / hippy, tolerant bitch…

3. Ahhh, who cares… let the black have her! She wasn’t that hot anyway…

4. I’m the one who’s getting hot! …Taking too much heat from these losers. I need a cool soda to cool me down!

6. First I see one beating my team. Then I see one with our women…do I have to see them taking our jobs?

7. What else do I have to see?  This stupid sign maybe? / This store employs immigrant workers as part of an equal opportunity policy

1. Damn it! Why don’t they stay in their own countries? If I had problems in mine- other than the ones they create, of course…

4. I’m done. I’ve had enough. I’ve put up with the footballer, the boyfriend, the employees, but not this bump…this weakling´s gonna pay for all the others! /Wha…?

5. Get up right now, you damn immigrant! Get up before I break your stupid face!

1. You useless alien hobo! Do you want me to kick you back to where you came from? Huh? / Please, no please

2. I beg of you! / Don’t worry, he, he… The river under this bridge will either drown your immigrant ass or just carry you back to yours!

3. Since you enjoy migrating so much  …I’m pretty sure you won’t mind migrating once again, even if it is back to your trashy, crappy country, isn’t it? / Police! Hands up! Now!

5. You have the right to remain silent. Anything you say or do may be used against you in a court of law… / I just wish we could also use the fact that you’re a racist, no matter what you might say now to avoid jail.

1. Later, after paperwork and paper / there you go mister. We have to let you go now, but we’ll be watching you and your gang too…understood? / Understood?  You’re trying to make me understand?

2. I can’t understand white brothers who treat blacks as bros too. Sorry! / …Kin!  My kind!

5. Must have been hell… police station cells must be full of black and immigrants, right? / and it’s no wonder, because, after all…

6. Our presidents hire them to beat us, businesses employ them over us, women we want prefer them to us, and even cops we look up to oppose us…/ so what are you gonna do to stop being trodden on by these aliens that keep immigrating instead of staying  where they freaking belong even if they starve, or get abused, are repressed, executed, bombed, trafficked or whatever-I don’t care?