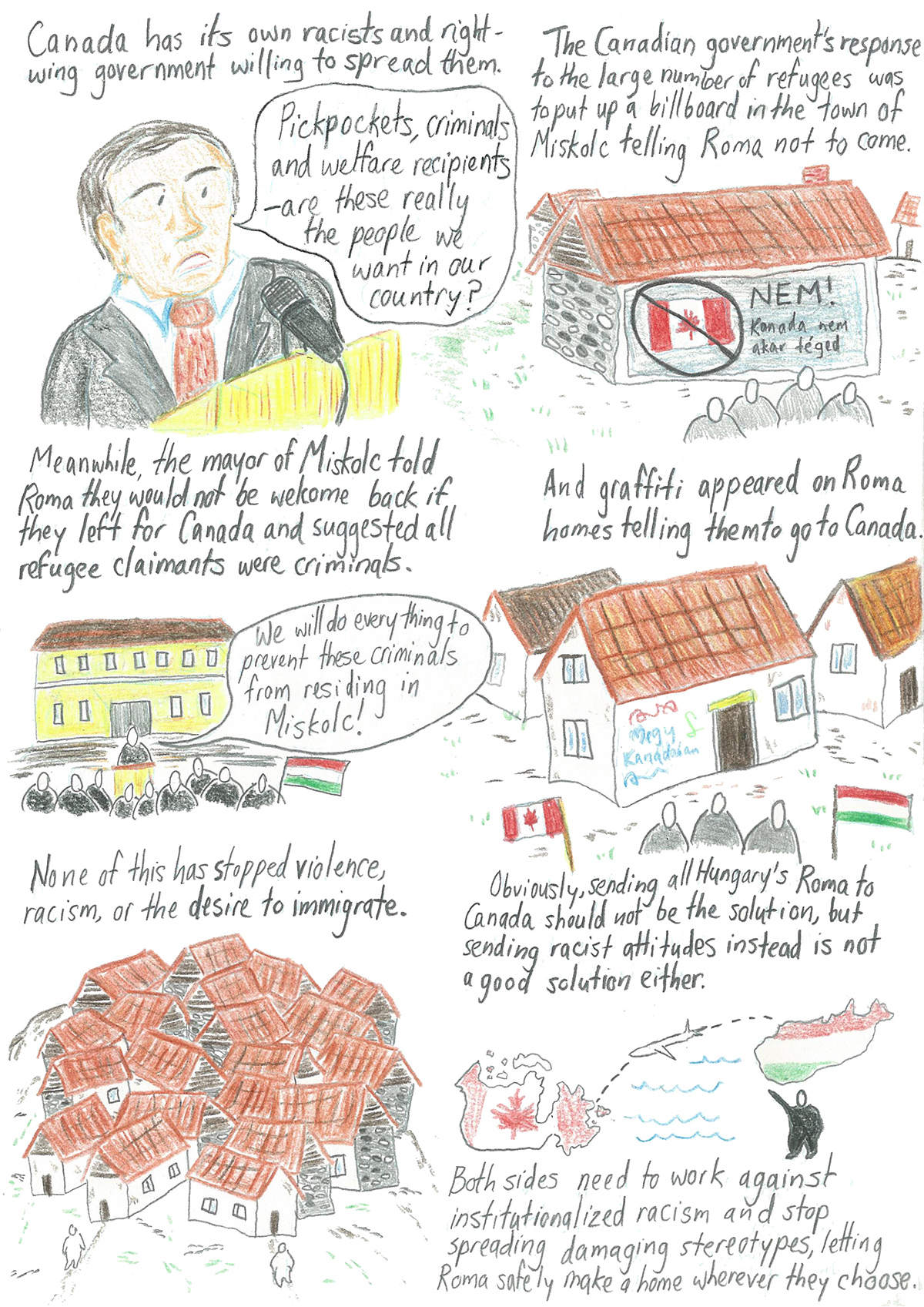 Roma people are Europe’s most widely persecuted minority. Moving to Hungary to study, I knew about discrimination against Roma people in central Europe but I was shocked to see how casually racist people were, even those who otherwise considered themselves open-minded. In Canada, “gypsy” stereotypes are more commonly about fairy tales than crime. At the same time that I moved, Canada started receiving large numbers of Hungarian Roma refugees and some similarly racist attitudes appeared in the Canadian media. This comic is an introduction to the story of the refugees.

1. In 2011 the greatest number of refugees to Canada didn’t come from a war-torn or poverty-stricken nation, but from Hungary, a European Union country.

3. In addition to segregated schools, discrimination in the job market, and living in neglected communities, Roma face violence and hate speeches, especially from people associated with the militant far-right party Jobbik.

4. For many years “cigánybűnözs,” “gypsy crime,” was an official category used by Hungarian police. / My wallet was stolen! / GYPSIES!

5. In Europe Roma are often a convenient scapegoat to blame for any crime, or sometimes seemingly for any social problem.

6. Canadians asked why EU citizens couldn’t move to another country in Europe, but discrimination remains strong and other countries find other ways to deal with Roma migrants. / OUT! / Back to Romania. / Or whatever.

7. In Canada most people don’t really know or hear enough about Roma to think much about these stereotypes. / I’ve been to Europe, it’s no wonder everyone despises these people. / However…

1. …Canada has its own racists and right-wing government willing to spread them. / Pickpockets, criminals and welfare recipients—are these really the people we want in our country?

2. The Canadian government’s response to the large number of refugees was to put up a billboard in the town of Miskolc telling Roma not to come. / NO! Canada doesn’t want you.

3. Meanwhile, the mayor of Miskolc told Roma they would not be welcomed back if they left for Canada and suggested all refugee claimants were criminals. / We will do everything to prevent these criminals from residing in Miskolc!

4. And graffiti appeared on Roma houses telling them to go to Canada.

None of this has stopped violence, racism, or the desire to emmigrate.

5. Obviously, sending all Hungary’s Roma to Canada should not be the solution, but promoting racist attitudes is not a good solution either. / Both sides need to work against institutionalized racism and stop spreading damaging stereotypes, letting Roma safely set up home wherever they choose.